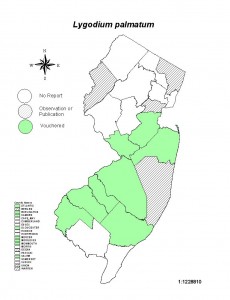 Range:  Inner and Outer Coastal Plain, Piedmont and Valley and Ridge in NJ.  Its range in North America is essentially Appalachian, ranging from New England down through the Appalachians, Piedmont and Appalachian plateaus.

Comments:  Listed in 9 adjacent states as threatened/endangered. Lygodium palmatum is the only species of this genus native to North America.  Also known as Hartford Fern, it is first plant to be protected by law in the United States in Connecticut due to it being gathered for Christmas decorations. Mary Hough shows it in Bergen, Union, Middlesex, Monmouth, Ocean, Burlington, Camden, Gloucester and Salem.  Specimens in CHRB from Atlantic, Burlington, Camden, Gloucester, Mercer, Middlesex, Monmouth, and Salem.  Specimen seen and photographed from Hardwick Township, Warren County in the DWGNRA.  Populations in Wall and Howell, Monmouth Co. without documentation.  Largest sites in New Lisbon and Brown’s Mills.  Seen along Batsto River (Burlington Co.), but not documented.