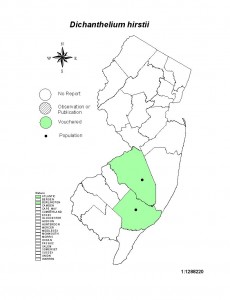 Comments: Dichanthelium hirstii is a cespitose rosette panic grass found in two small populations in Burlington and Atlantic Counties. Both populations are in or associated with circular depressions formed in peri-glacial environments. The plant is relatively robust for the genus, towering over nearby Panicum rigidulum specimens. Its narrow raceme-like spike and distinct spikelets distinguish this species from any other in the genus. It was discovered by Bob and Frank Hirst whose name is applied to the species. It was initially confined to a few colonies in Central Atlantic County but a new population was discovered by PBC and FNJP members in Burlington County’s Wharton State Forest. Outside of New Jersey, the plant is limited to four counties: Sussex County, Delaware; Oslow County, North Carolina; and Miller and Calhoun Counties, Georgia (USDA 2014).

Unlike the FNA treatment, FNJ does not subscribed to the recent lumping of Dichanthelium hirstii into one polymorphic species Dichanthelium dichotomum. Habitat distinctions, extreme morphological differentiation and other obvious ecological features clearly form a basis to segregate this species from any other affiliation.  USFW (1980 Federal Register) assigned this plant to a hybrid status, between Panicum hemitomom and Panicum {Dichanthelium} spretum.

Reference Specimen: [To be provided.]