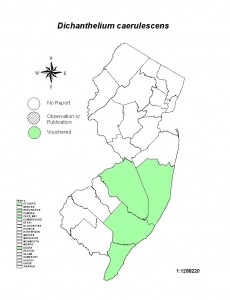 Comments: The bluish rosette panic grass has a distinct blue color to its stems and leaves, providing the basis for its common and Latin name.  The plant is similar to the Dichanthelium dichotmum group and has been lumped by a number of recent authors with this species. The Flora of New Jersey does not concur with this lumping and continues earlier taxonomic tradition.

The New Jersey Natural Heritage Program lists the plant as a historic occurrence. Mary Hough (1983) said it was known from extant sightings in the 1970s and 1980s.  The FNJP author’s last sighting of this unusual species was in the late 1980s when a specimen was collected in New Gretna’s brackish marshes near Jobs Creek, coincidently alongside a plant once considered historic and unseen for more than a century!