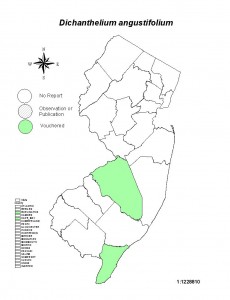 Comments:  New Jersey’s populations are confined to the southern coastal plain.   Early collections are from Cape May County.   More recent collections have discovered this species in Burlington County.   Hough (1983) lists northern Cape May as its distribution limits.  It is found throughout the Atlantic Coastal Plain specifically in southeast United States. This species has a similar distribution as Dichanthelium aciculare and is included within D. aciculare descriptions by Flora of North America (Freckmann and Lelong , Volume 25, 2003) and NJ Natural Heritage.  It has been separated by the Flora of New jersey Project based on characteristics such as a larger and acuminate spikelet.  Like D. aciculare, D. angustiflorium is a rare rosette grass at its northern limits of distribution.  Distribution map based only on Chrysler Herbarium specimens.