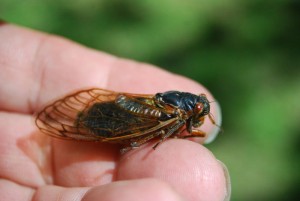 Anyone living in an oak dominated part of New Jersey is experiencing one of natures most dramatic acts:  the explosion of the 17 year cicada.  These wild creates have emerged from a 17 year sleep and like crazed teenagers they have few things on their minds and sex is at the top!  Bulging eyes and a deafening sound creates a surreal scene in the woodlands.  The 2″ long bugs creep out of the ground, stiffen their wings and fly toward the nearest calling group.  As the number swell so does the sound.  It masks jet airliners, car traffic and other high end sound.  Unlike the yearly cicada that calls in the late summer, announcing the dogs days, this species is a late spring species, creating a cacophony of sounds.  At times you would think the aliens have landed.  The sound is reminiscent of the Encounters of a Third Kind type of hum.  I think its a great sound, but so think its annoying.  Well, like most art, its in the ear of the beholder!

If you have never heard the noise, hop in your car or travel to the southern counties of Atlantic, Cumberland, Gloucester and Salem.  They are omnipresent and you’ll have a good story to tell until the next brood awakens, in 2030!