This is the FNJP’s 142nd edition of Guess that Plant! 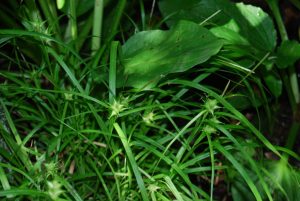 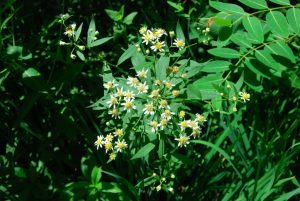 Januarys Guess that Plant is the native herbaceous plant, flat-topped aster.  Doellingeria umbellata is a member of the Daisy or Composite family, the Asteraceae.  Mary Hough (1983) found voucher specimens from most New Jersey counties, sans Salem and Cumberland, and the Northeast urban corridor. It is a widely distributed perennial with wetland habitat requirements (US FWS FACW).  It is found in wet edge, meadows, and open woodland habitats with the exception of the central Pine Barrens. Stone (1910, page 763) lists the species under the Doellingeria genus. He reported the species in the Northern and Middle District, the Inner Coastal Plain of today’s landscape, as well as along the Coastal strip.

Doellingeria umbellata is the only member of the genus in New Jersey. The plant was described under the name Aster umbellatus for most of the 20th century, until its nomenclatural return to its former named genera.

Moerman (1998) describes Native American uses of the infusions of the leaves to aid gastrointestinal aid, and was said to be good for stomach ailments.  Our Guess that Plant is a fall flower, with flowers appearing from late July/August into mid-September.

This site uses Akismet to reduce spam. Learn how your comment data is processed.