February 2023 Plant of the Month 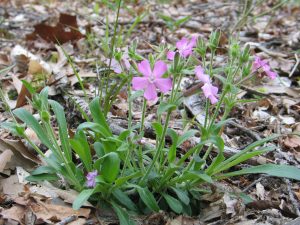 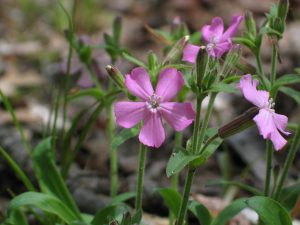 The February Plant of the Month is a native perennial herb. Wild Campion is a member of the Pink family, the Caryophyllacea.  Our Plant of the Month is a subspecies that is found throughout the northern eastern United States on dry sandy soils, dry roadsides, and exposed outcrops.  New Jersey’s distribution is Statewide with voucher specimens collected from most counties (Hough, 1983).  It is absent in the central Pine Barrens. The photo above is from a Monmouth County population credited to our late founding FNJP member, Bill Olson.

The Pink family is a large, diverse group with many genera that are native to our state. New Jersey is habitat for about a dozen members of genus Silene, both native and introduced.  Wild Campion has a pink flower with glandular stems and leaves. Our subspecies is found in the Northeast, whereas spp. caroliniana is distributed in the Southeastern United States, and spp. wherryii is found in the lower Mid-West.  Stone (1910; page 438) describes the New Jersey’s plants as “characteristic West Jersey plant, easily recognized by its bright pink flowers, sticky pedicels, and general rosette-like habit.”  Our Plant of the Month flowers from late April into early June, with seed capsules produced from August to September.

Wild Campion is a well-know plant in the rock garden community and has been used in native gardens when available. Moerman (1998) has no listed use for the species, yet has a dermatological use for its native white flower kin, Silene stellata.  It is likely the known Native American uses for this species have been lost, as it has been for so many other plants with the loss of local native populations, both plant and human.